How and why do we have two different standards of proof in civil and criminal proceedings?

‘The balance of probabilities’ is the standard of proof used in all civil court proceedings, so includes care proceedings.

The other standard of proof we use is the one in criminal cases which is ‘beyond a reasonable doubt’ or that the jury must be ‘sure’ a crime was committed, which is a higher standard due to the very serious consequences that can follow a criminal conviction, such as loss of liberty.

Its often difficult for non lawyers to understand that there are two separate systems which work on two different ‘standards of proof’ and many parents struggle to accept that the lower civil standard of proof is used to make findings about parents which are often just as serious as a decision to send someone to prison. For example, the family court gets to decide whether a child is removed permanently from the parents’ care. This struggle becomes even more acute around the issue of removing children at risk of future emotional harm – i.e. for something that hasn’t happened yet, but the court thinks will.

I agree that if the State takes your child away, that is a very serious and significant interference in the family life of both parent and child. But if children are left in dangerous situations, that also puts them at serious risk of being hurt, either emotionally or physically. Therefore, it is a deliberate decision to use balance of probabilities in family cases because we could not always prove children were at risk using such a high standard of proof, or it may take much longer to find and gather together the evidence to have a court hearing, leaving the children at risk of harm while this is done.

Baker J discussed the issue of the burden and standard of proof in 2013:

In English law, the House of Lords has now concluded definitively that in order to determine whether an event has happened it has to be proved by the person making the allegation on the simple balance of probabilities. Where the law establishes a threshold based on likelihood, for example that a child is likely to suffer significant harm as a result of the care he or she would be likely to receive not being what it would be reasonable for a parent to give, the House of Lords has also concluded that such a likelihood, meaning a real possibility, can only be established on the basis of established facts proved on a balance of probabilities.

There are those who considered that to require the proof of past harm was a misreading of the intention of Parliament, and that a system devoted to child protection should not imposed such a high hurdle. It was argued, and in some quarters is still argued, that since we would not insist on proof before protecting our own children from risk, we should adopt the same cautious approach when protecting other, more vulnerable children. The House of Lords has of course firmly rejected that approach, which of course would at one extreme involve removing children from their parents on the basis of mere suspicion.

However, it is clear that certainly in ‘finely balanced cases’ that a finding can often be very difficult for parents to accept, particularly as any finding then becomes ‘the truth’ unless and until it is challenged. Our current system of fact finding permits only two outcomes (the ‘binary system’) – either it did or it didn’t happen.

Application of the standard of proof in care proceedings .

In care proceedings, the Judge has to be satisfied that the evidence to show that your child is suffering or is at risk of suffering significant harm has been proved on the balance of probabilities. This phrase has been explained to mean ‘more likely than not, or ‘ ‘more than 50/50’.

Baronness Hale said at paragraph 69 of her judgment:

There are some proceedings, though civil in form, whose nature is such that it is appropriate to apply the criminal standard of proof. Divorce proceedings in the olden days of the matrimonial “offence” may have been another example (see Bater v Bater [1951] P 35). But care proceedings are not of that nature. They are not there to punish or to deter anyone. The consequences of breaking a care order are not penal. Care proceedings are there to protect a child from harm. The consequences for the child of getting it wrong are equally serious either way.

Baronness Hale stated ‘loud and clear’ that the standard of proof in care proceedings is the simple balance of probabilities, neither more nor less.

Neither the seriousness of the allegation nor the seriousness of the consequences should make any difference to the standard of proof to be applied in determining the facts. The inherent probabilities are simply something to be taken into account, where relevant, in deciding where the truth lies. […] It may be unlikely that any person looking after a baby would take him by the wrist and swing him against the wall, causing multiple fractures and other injuries. But once the evidence is clear that that is indeed what has happened to the child, it ceases to be improbable. Some-one looking after the child at the relevant time must have done it. The inherent improbability of the event has no relevance to deciding who that was. The simple balance of probabilities test should be applied.

The dangers of ‘pseudo maths’ to determine the balance of probabilities

The court examined this in the tragic case of A (A child) 2018.  In November 2016 S, aged only 10 years, was found dead in her bedroom. Initially it was thought this was a tragic accident – that she had become entangled in decorative netting around her bed and injuries to her neck caused her death. There were problems at the outset in the police gathering evidence at the scene.

However it was then discovered she had injuries to her genitals, probably inflicted about 12 hours before she died and the view of the experts was that this made it more likely that the neck injuries were deliberately caused, probably in some sexually motivated homicide.

However at the first hearing the LA failed to persuade the Judge to make a finding on the balance of probabilities that both sets of injuries were deliberately inflicted. The LA appealed successfully to the Court of Appeal who criticised the first instance Judge for failing to look at the wide canvass of the evidence and to consider neck and genital injuries together, and also for attempting to apply ‘pseudo maths’ to the analysis of the balance of probabilities, in particular by identifying percentages for each possibility and adding them up. As the Judge could not reach ’51’ by this method, he concluded the LA had not met the standard of proof.

The Judge relied upon the decision of Mostyn J in A County Council v M & F [2011] EWHC 1804 (Fam), [2012] 2 FLR 939 as support for his contention that, where there are rival hypotheses, the judge is not bound to make a finding and that as a consequence the burden of proof is the only course to take. The judge went further saying at para 98 of his judgment that:

“98. I find that this is one of those unusual cases where the burden of proof comes to the judge’s rescue. Aggregating, as I must, the probability of suicide together with the probability of accident, I find that the aggregate of these two is more than 50 per cent. Doing the best that I can, I find that the possibility of suicide is about 10 per cent, and the possibility of accident and a perpetrated act are about 45 per cent each. It would be wrong for anyone to regard these figures as in any way accurate, for of course they are not. They persuade me, however, that the local authority has not discharged the burden of proof which is upon it. I am not satisfied, on the balance of probabilities, that this was a perpetrated act, albeit that I recognise that it is one of three possibilities. On the basis, however, that I do not discard the least probable and then allow a competition between the other two options, but that I should look at each of the alternative possibilities and aggregate them together, I am quite satisfied that the burden of proof in this case is not discharged. Accordingly, I do not find that the local authority’s case is proved in respect of any of the contested issues. By application of the binary principle, it is the finding of this court that neither the father, the mother, M or N are responsible for a sexual assault on L and nor are they responsible for her death. Accordingly, threshold is not met.”

The Court of Appeal firmly rejected this approach at para 51 of their judgment and emphasised that the starting point remains the test articulated in Re B (Minors) 2008 2 WLR 1 HL, discussed above:

“70. My Lords, for that reason I would go further and announce loud and clear that the standard of proof in finding the facts necessary to establish the threshold under section 31(2) or the welfare considerations in section 1 of the 1989 Act is the simple balance of probabilities, neither more nor less. Neither the seriousness of the allegation nor the seriousness of the consequences should make any difference to the standard of proof to be applied in determining the facts. The inherent probabilities are simply something to be taken into account, where relevant, in deciding where the truth lies.

It is the binary nature of our fact finding system that makes the ‘balance of probabilities’ sometimes an uneasy place to be. If the court finds something happened then that is ‘the truth’ that all must abide by for all future dealings with the family. If the court finds something didn’t happen then it simply never did. I am not alone in feeling uneasy about the consequences of this from findings made on the lower standard of proof, particularly when the fact finding exercise is offered as ‘the child’s right’ to know ‘the truth’ about what happened – See comment from the Justice Gap and  The Transparency Project in ‘further reading’ below.

However, what is clear is that the Judge must meticulously examine a broad canvass of evidence and not be swayed by any ‘pseudo mathematics’.  while I can sympathise with a Judge who attempts to impose some clarity on the analytical process by affording a ‘value’ to the options of suicide, accident, or deliberate killing, this is now clearly identified and rejected as unlawful. 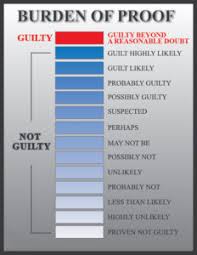 36 thoughts on “What do we mean by proving something ‘on the balance of probabilities’ ?”