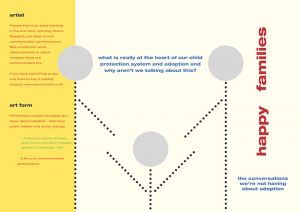 On 23rd September 2017 at the Arnolfini in Bristol I will be performing for the very first time a unique ‘ oral performance installation’ that doesn’t involve dry law lectures or angry ranting on Twitter. Neither activity has done much to promote wider and better conversations about the child protection system.

To my sorrow the recent furore over The Times reporting about the Christian child and the Muslim foster carers demonstrates just how dry the well of public debate has become about such important issues.

I am really pleased to say we now have a full house for the performance on on September 23rd – and I am even more pleased to note the majority are NOT my friends or family so presumably they are drawn to the subject matter itself and think that this is worth an hour or two of their lives.

We are also performing the same piece in London on 28th October at The Depot on Upper Clapton Road – again, its free to come but you will need to register for tickets. Please scroll to the end of this post to find all the links for tickets etc.

We have to talk

As I wrote in my first blog about this the aim of the performance was to explore with artist Pamela Neil how we communicate some of the thought and ideas I have around adoption, to reach a wider group of people and starting conversations I think we should be having.

Attempts to broaden debate and understanding often falter because when the debate pushes so many emotional buttons, attempts to make a particular argument often seem to end up being a barrier to communication rather than opening a door to greater understanding and awareness – its not so much the FACTS that win hearts and minds but the FEELINGS they create.
Is it possible therefore to come at this from another angle? Not the dry legal approach which has informed my training and professional life – but trying to shine a light on the issues in another way?
One of the most important benefits of any performance or work of art must be how powerfully complex thoughts and ideas can be communicated to an audience; straight to the heart, rather than draining our interest in a dull legal lecture and PowerPoint.

When I wrote that back in June I had simply no idea how this would work or what I would have to do. I came into the exercise without any preconceptions about what was needed from me. That has proved both a blessing and problem. I simply had no idea just how hard it was to find the story I wanted to tell: to share the thoughts and ideas that were important to me with others, in a way that that provided access to the audience.

I had to free myself from assumptions that OF COURSE my listener understood what I was saying. While I am comfortable with writing, I was naive about what it meant to share thoughts and ideas in an oral form.

Its been a long and hard process – first drawing out what I wanted to say, then turning that into a form of expression that could be communicated orally in a way to engage an audience of people who may not be familiar with the topic.

I think we have now identified what it is I want to say. We now move onto the next phase, finding a way to say it that both works for me and engages the audience, giving them access to my thoughts and ideas, but on their terms.

Pamela has born this process with remarkable patience, explaining that I can never assume that others know or understand what I am saying – I need to take her by the hand and walk her over to where I want her to stand so she can see what it is that I see. If I am advocating for a change in the way we view adoption by having open, honest and transparent conversations, I need to show her what an open and honest conversation looks like and what changes it can bring.

She has explained that we are creating a unique oral art installation – not a lecture or a speech.

I hope that come September 23rd Pamela and I will have created something that is worth hearing, something that will leave the audience with no doubt that we have to talk.

But whatever happens at either performance, good, bad or indifferent, I know that this has been a profoundly useful process for me and explained a lot about why it is so difficult to communicate, to make others see what you want them to see.

We tend not to take people by the hand either metaphorically or literally. We talk AT them, we talk OVER them we talk ABOUT them. Nobody ever changed their mind by being patronised, belittled or shouted at. It’s easy to forget that each member of an audience will have a different view about what they hear, and therefore what they take away.

We urgently need to start talking about the things that matter and I hope this is going to be a good starting point that may plant some seeds for change in the minds of the audience.

Everything planted is likely to grow. 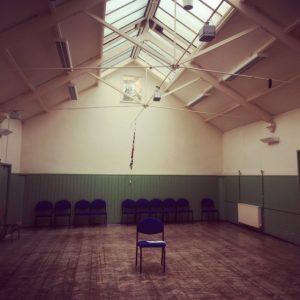