I was asked to speak at the recent Open Nest Collaborative Conference on Monday 14th October in York – just five minutes on human rights. O easy I thought, just a quick chat about Article 8, job done.

But then Amanda Boorman, founder of the Open Nest Charity showed me what she had written down as important to get across to the audience.

Protocol 1 Article 1 of the ECHR provides

Every natural or legal person is entitled to the peaceful enjoyment of his possessions. No one shall be deprived of his possessions except in the public interest and subject to the conditions provided for by law and by the general principles of international law.

Amanda, rightly, thought this was very important from the perspective of the child in the care system, who finds their treasured possessions lost or thrown away as they are moved about from placement to placement.

She also wanted to talk about Article 14

The enjoyment of the rights and freedoms set forth in this European Convention on Human Rights shall be secured without discrimination on any ground such as sex, race, colour, language, religion, political or other opinion, national or social origin, association with a national minority, property, birth or other status.

This was clearly very important in light of the growing concern about the impact of poverty on how likely it was to find yourself referred for a child protection concern.

I was shocked to consider that it had simply not occurred to me – the lawyer – to discuss either of those two issues. I was content to trot out our old favourite Article 8 – the right to a family and private life, to psychological integrity – but the right that cuts both ways for the child in the care system; their ‘right’ to retain some kind of link with their birth family, considered of less or even no importance when balanced against their need for a ‘warm, loving forever family’.

So I had to confess my embarrassment that it had not even occurred to me to examine either of these rights, despite the impact both had on children and families in care and adoption proceedings.

I recalled earlier unease when I discussed  the ECHR with social workers on Twitter and found that they did not seem aware of the importance of such rights- I wrote about that here.

This concern had also been stated by Brid Featherstone that day, in her talk about the BASW Inquiry into the role of the social worker in adoption

We found social workers were ignorant of human rights and didn't use ethical frameworks. What does this mean for us as a profession? Education, training and policy. BASW committed to developing framework. But need to take off the shelf and make it real.

She asked the audience what do YOU think we need in this framework? At every stage of process, to ask – what should social workers be doing?

Andy Bilson then raised the UN Convention on the Rights of the Child -this has has 54 articles setting out the civil, political, economic, social and cultural rights that all children everywhere are entitled to.  It is ‘the most complete statement of children’s rights ever produced and is the most widely-ratified international human rights treaty in history’ . The Social Services and Well Being (Wales) Act 2014 makes specific reference to the UN Convention in its ‘overriding duties’ at Part 7 –   a person exercising functions under this Act in relation to a child falling within section 6(1)(a), (b) or (c) must have due regard to Part 1 of the United Nations Convention on the Rights of the Child adopted and opened for signature, ratification and accession by General Assembly resolution 44/25 of 20 November 1989 (“the Convention”).

However I don’t think I have ever made reference to the UN Convention in any English case in my now 20 years of practice.  Hopefully the consideration by BASW of a new framework for social work education about human rights can bring the UN Convention more sharply into focus.

Why are Human Rights important?

But if I , the lawyer, couldn’t see the importance of Protocol 1 and Article 14 in the context of adoption,  without it being pointed out to me – how can I criticise social workers for not being as alive to the ECHR and its implications as I would wish?

So I thought it worth a reminder of why the human rights framework is so important when looking at State intervention in family life – particularly when the State intervenes to remove children permanently from their family of origin on a low standard of proof.

The European Convention on Human Rights (ECHR) protects the human rights of people in countries that belong to the Council of Europe – this is separate from the European Union and is larger, it has 47 members as opposed to the EU’s 28 (or shortly 27). Therefore it will NOT disappear if  Brexit actually happens.  This may be a disappointment to those who scoff at human rights as some kind of namby pamby pandering to snowflakes, but anyone who takes that view is revealing a disturbing ignorance about events still in living memory – when a European nation, home to great literature, music and scientific discovery, decided that it would categorise a number of its own citizens as ‘untermensch’, round them up, send them to concentration camps and kill them.

The ECHR was the response to the horrors of the German ‘Final Solution’ to eradicate the Jewish  people. It was largely drafted by British lawyers and came into force in 1953.

The Convention guarantees specific rights and freedoms and prohibits unfair and harmful practices.

Although Article 6 and Article 8 will continue to be the rights of overarching importance in care and adoption proceedings, all of us who work in this field have an obligation to become familiar with ALL the rights and freedoms protected.  I note for example the right to education and the negative impact that care proceedings often bring to a child’s continuing education, ending up in a foster placement far from a much loved school.

As Elie Wiesel said, having survived the Holocaust – it is by denying our essential humanity that makes it easy to destroy another.   Taking someone’s child away is an act that strikes against the psychological integrity of both parent and child. That child may urgently need taking away, the sooner the better; but if we persist in mechanisms of removal that deny both parents and child their fundamental human dignity, then we do great harm.

We don’t fight to preserve the human rights of others simply for their sake – it is also for our own. 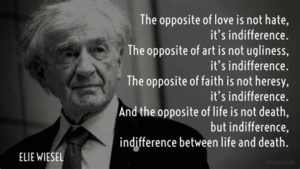 An interesting roundup of the day from the Adoption and Fostering Podcast.

7 thoughts on “Human Rights and Adoption”