I was really pleased to attend the Tortoise ThinkIn in London on May 1st. The aim of Tortoise is to ‘flesh out’ how to take reporting forward. A ThinkIn is a system of organised listening, a forum for civilised disagreement and the ‘engine of our journalism’.

Polly Curtis, the journalist who has already written examining in depth the child protection system, and James Harding, the co-founder of Tortoise and former Editor of The Times, chaired the discussion. It is not difficult to see why they are interested in understanding more about the child protection system; many are seriously concerned at where we now find ourselves. As Polly commented in her article ‘The Poor Parents’:

These are the numbers: by the time they reach their fifth birthday, nearly one in five children have been referred to social workers. The number in care has peaked at 75,000 – the highest level since records began in 1994. The system designed to keep our children safe is creaking under its caseload.

So what is going on? Opening the floor to those who are ‘really thinking’ about the issues – regardless of their backgrounds and experience,  may open up a different perspective and increase the understanding of even the most specialist participant.

The starting question asked  –  what are the drivers to this huge increase in care proceedings? Andy Bilson made the point that there are drivers both inside and outside the system. Outside we see the cuts in services, poverty and deprivation. You are ten times more likely to be in care if you fall within the bottom 10% of the most deprived in the population. Then there are the drivers within the system; defensive social work practice and risk aversion. He noted that before their 5th birthday 1 child in 16 would be investigated for risk of abuse; in 66% of cases no abuse is found. There is no evidence that the current child protection system works. Social work itself has changed.

We circled back to this point with a variety of speakers. One made the very powerful point that we were seeing ‘assessment without action’. Box ticking was a way for social workers to guard against criticism but the work had no purpose.

So why are social workers so defensive? I was very glad to hear James Harding admit that he had felt ‘uncomfortable’ for much of the discussion, recalling the role he had played as a journalist in shaping the narrative around child protection issues; a focus on ‘single issues’ that then translated to political culture.

We could all see the spike on the graph after2007 and the media storm around the death of Peter Connolly. As one speaker commented, as a society we have a collective responsibility for how social workers behave – if they are to be subjected to death threats for not intervening and a child dies, then do not be amazed if a decade later we are seeing the ripple effect of that defensive culture still in operation.

There was much talk about ‘timescales’. Clarissa, a parent whose children have been adopted said how much she hated the word as she heard it all the time. She was told to write a letter to her children apologising for ‘not making changes’ ‘within their timescales’ – changes she said she did not know how to make. Alice Twaite of The Transparency Project commented that access to knowledge comes too late; legal aid provision is skewed to the very end of the process where the 26 week timescales for care proceedings may mean it is impossible for parents to access the therapy or support they need to show that they can turn things around. I commented that the apparent rigidity of the 26 weeks caused me concern; not least because I saw real fear and unease in court at times when Judges commented that they had to keep the case ‘on track’ or risk ‘their stats’ being scrutinised.

But of course, the response to that is that 6 months is a long time if you are a baby – its possibly your entire life.  The neurological evidence seemed clear – the impact of abuse and neglect on young children was very serious. We had to move quickly to prevent children becoming very seriously damaged. Polly commented that this would be a fruitful area of further investigation as something substantial that can be measured.

What is our narrative?

There were so many other points made of interest that it would take a blog post of many thousand of words to cover it all. I have tried here to highlight what resonated most for me. What I find most compelling is the intersection of the various narratives. What ‘story’ do we want to tell, and why?  Is it about the child who needs ‘rescuing’ from the dangerous home? Is about the mother like Clarissa who sees her children once a year and counts herself ‘lucky’ to do so; she grieves every birthday, every Christmas.  Is it about austerity and cuts and lack of services? Is it about distrust and blame and fear?

Its all of these of course. And that has been the challenge for journalists over the years. To take these many and unweilding narratives and from that find a story that the public want to read. When the family courts are closed and secretive, journalists will fill the gaps in their knowledge with the sensationalised. The challenge is now upon us all to investigate openly and honestly. As Alice Twaite pointed out; journalists need to take care with their narratives. If there is a published judgment where findings of fact have already been made, those cannot be skated over in favour of a more lurid and clickbait worthy narrative from a parent who may not have an incentive to reveal all the necessary detail.

I have been – rightly I think – very critical of journalists in the past and I think the negative legacy from their reporting of the deaths of Peter Connolly and Victoria Climbie is with us still. But many of us ‘in the system’ have not helped the wider public to understand, indeed many still cleave to ‘privacy’ as some strange badge of  honour.

I do not know what we need to do to turn this ship around. And I appreciate that constant talking around a problem can appear nothing more than an indulgent waste of time. But this felt different. Since 2015 and the first CPConference. I had often felt despair about how the willingness to engage in talking would ever translate into action.  But finally now, it seems as if something is happening. Parent advocacy groups are springing up around the country, Louise Tickle continues with her Open Family Court project – and Tortoise shows that there is appetite for a different kind of journalism that may finally give children and families the examination of their narratives that they deserve. 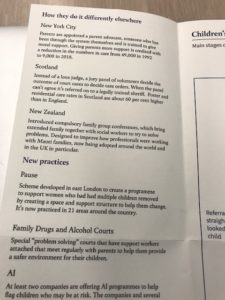 4 thoughts on “The State versus the family: does the Government no longer trust parents?”